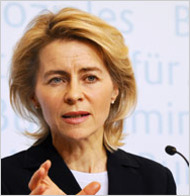 With 383 votes in favour, the European Parliament has elected Ursula von der Leyen president of the next European Commission in a secret ballot.

From Wikipedia: https://en.wikipedia.org/wiki/Ursula_von_der_Leyen
Ursula Gertrud von der Leyen (German pronunciation: [ˈʔʊɐ̯zula fɔn dɛɐ̯ ˈlaɪən] (About this soundlisten); née Albrecht; born 8 October 1958) is a German politician and the President-elect of the European Commission. She served in the federal government of Germany from 2005 to 2019 as the longest-serving member of Angela Merkel's cabinet. She is a member of the centre-right Christian Democratic Union (CDU).

She was born and raised in Brussels, where her father Ernst Albrecht was one of the first European civil servants. She was brought up bilingually in German and French, and is of German and British American descent. She moved to Hanover in 1971, when her father entered politics to become Minister President of the state of Lower Saxony in 1976. As an economics student at the London School of Economics in the late 1970s, she lived under the name Rose Ladson, the family name of her American great-grandmother from Charleston, South Carolina.

Burning of Heifer Takes Place in Preparation for Third Temple

A major step was made towards reinstating the Temple service: after an intensive study into the practical details, an actual heifer, albeit not a red one, was burned in precisely the manner that will enable the Jewish people to be purified.

The red heifer is not a sacrifice per se so it is burned in an area outside of the Temple, on the Mount of Olives. According to Jewish tradition, there have been nine red heifers since the mitzvah was given at Mount Sinai and the tenth red heifer will be used in the era of the Messiah. The last red heifer was prepared by the high priest Ishmael Ben Piavi around 60 CE and its ashes sufficed for the next three hundred years.

The Most Enigmatic Commandment

Chapter 19 of the Book of Numbers gives an in-depth description of the mitzvah (Torah commandment) of the burning of the red heifer and subsequent mixing with water for the purpose of sprinkling on the Jews as a means of ritual purification from contact with a dead body. Despite the Biblical description, the mitzvah of the red heifer is considered the most enigmatic of all the Biblical commandments. The red heifer is essential to the restoration of the Temple service.

The return of the mitzvah of the red heifer is described by the Prophet Ezekiel as a stage in the final redemption.

Read the rest of the article here - https://www.breakingisraelnews.com/135387/exclusive-burning-red-heifer-takes-place-preparation-third-temple/

On September 25, the 5,780th anniversary of the day on which Jewish tradition holds the world was created, the Sanhedrin is holding a conference for the emerging Organization of 70 Nations. The conference will culminate in an animal sacrifice made by representatives of the nations on the Mount of Olives in which they will renew the covenant made by Noah upon leaving the Ark.

The Conference and 70 Nations

The conference will begin on Wednesday evening, September 25, the 25th day of the Hebrew month of Elul at the Jerusalem Gate Hotel and continue until Friday, September 27. Lectures and discussions will focus on the Noahide obligations incumbent upon all of mankind. Also discussed will be the universal economic, cultural, educational that should be the focus of such an organization. A major focus will also be the establishment of an international court based on Bible principles.

God established the borders of the world based on the 70 children of Israel who went down to Egypt and the 70 nations that came out from Noah. The concept of 70 nations also appears in reference to the 70 oxen offered in the Temple throughout Sukkot (the feast of the tabernacles) which the Talmud (Sukkah 55b) teaches are for the merit of the 70 nations.

The organization emphasizes that every nation will keep its unique and distinct national identity, cultural heritage, language, and recognized borders.

In attendance will be official representatives of several nations: Representing Guatemala, Vice president of the Republic of Guatemala Jafeth Ernesto Cabrera Franco as well as several of his advisers. There will also be official delegations from El Salvador, Mexico, Honduras, Bolivia, Trinidad Tobago, and Costa Rica. Many other countries have yet to commit to attending. Several of the delegates are parliamentarians of their respective countries.

Read the rest of the article here - https://www.breakingisraelnews.com/136435/nations-invited-animal-sacrifice-mount-of-olives-renewing-noahs-covenant/ 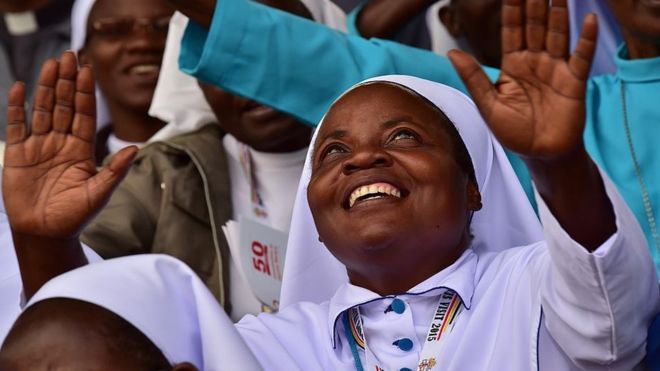 Pope Francis in Africa: Is the continent the Catholic Church's great hope?

It will be his fourth visit to the continent since he became the head of the Roman Catholic Church in 2013, compared to the two his predecessor, Pope Benedict XVI, made during his eight-year papacy.

The importance of Africa to the Catholic Church can be summed up in a word - growth.

Africa has the fastest growing Catholic population in the world, while Western Europe, once regarded as the heartland of Christianity, has become one of the world's most secular regions, according to the US-based Pew Research Center.

And many of those who do identify themselves as Christian in Western Europe do not regularly attend church.

In contrast, Christianity, in its different denominations, is growing across Africa. The Pew Research Center predicts that by 2060 more than four in 10 Christians will be in sub-Saharan Africa. 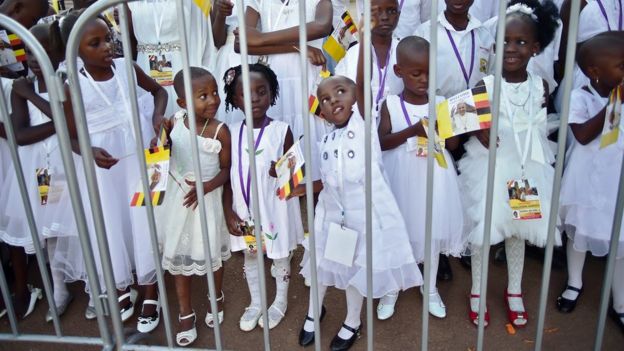 "I think Africa is where the future is really [for the Catholic Church]," says Nicolette Manglos-Weber, Assistant Professor of Religion and Society at Boston University's School of Theology.

Russia And Iran: The Anti-U.S. Alliance (A little history on Russia & Iran/Persia)

The End is Nigh: EU Parliament Approves Brexit BRUSSELS (AP) — The European Parliament overwhelmingly approved the departure terms of the United Kingdom from the European Union — the final major decision in the four-year Brexit saga.

After an emotional final debate on Wednesday, legislators voted for the withdrawal agreement that will end Britain’s 47-year membership in the bloc. The vote was 621 to 49 in favor of the Brexit deal, with 13 abstentions.

After Britain’s departure on Friday, the U.K. will remain within the EU’s economic arrangements until the end of the year though it won’t have a say in policy as it will not be a member of the EU anymore.

“We will always love you and you will never be far,” said EU Commission President Ursula von der Leyen on a day when some legislators were moved to tears.

Britain is the first country to leave the EU and for many in Europe its official departure at 11 p.m. London time on Friday, Jan. 31 is a moment of enormous sadness and reduces the number in the bloc to 27.

Iran-China 25-years agreement, an attempt to save the regime

Addressing an open session of the Iranian Majlis on Sunday, July 5th , Mohammad Javad Zarif, the Foreign Minister of Rouhani’s government said, “there is nothing secret in the 25-year deal between Iran and China”, adding “Tehran will make the contents of the agreement public”.

This statement came in response to a report by a conservative News Website revealing that the administration has approved a 25-year deal with China and that Zarif was tasked to finalize the agreement.
Mahmoud Ahmadinejad, Former Iranian President, whom his followers have gained several seats in the new Majlis, rejected the secret Iran-China deal and demanded clarification prior to Zarif’s appearance in Majlis.
One of the significant elements of the deal would be a 280 billion Dollars Chinese investment in Iran’s oil, gas, and petrochemical sectors, as well as a 120 billion Dollar investment in Iran’s transport and manufacturing infrastructure. Chinese companies will be given the first option to bid on any new project in Iran.

On the payment terms, China will be given up to 32% discount in the oil and gas prices. In addition, China will be granted up to two years delayed payment and to pay in soft currencies from businesses in Africa and the Former Soviet Union states.

Another element of the deal is that up to 5000 Chinses security personnel will be allowed into Iran to protect Chinese projects and benefits.

In exchange, China is expected to veto any United Nation Security Council resolutions against Iran.
The news about the Iran-China 25-year agreement sparked lots of frustration among Iranians across the globe. Iranians are comparing this agreement with the Turkman Chay agreement between Russia and Iran in 1828, where Iran lost around 250 kilometers of land (parts of current Turkey, Armenia, and Azerbaijan) and access to the Caspian Sea. In exchange Russia promised to support king Abbas Mirza at the time.
In response to public frustration, Iranian Foreign Ministry’s Spokesman, Seyyed Abbas Mousavi, issued a statement defending the deal and considering China the world’s leading economic power in the near future!

One of the 1979 revolution’s cornerstones was the slogan “Neither Eastern, Nor Western, Islamic Republic of Iran”. This slogan is designed into the Iranian Foreign Ministry logo and is also seen on their office front doors. However, today, the mullahs ruling Iran are leaning towards East, selling out Iran’s natural resources not only to China but also to Russia.

The current rulers are willing to give up Iran’s oil and gas with 32% discount and 2 years delayed payment and allow China to be the first to bid and eventually control Iran’s transport and manufacturing infrastructure in a 400 billion dollar contract. China will also be granted a strong military presence as part of the agreement. This could sound like a good deal to China, but the two questions China will ask itself is: will this regime stay in power long enough to make China’s investment profitable? And will any democratically elected future Iranian government respect such agreement?